The Most Popular Types of Story Structure

What Are The Best Story Structure Examples?

What is popularly known as the Three-Act Structure today was first hinted at, long ago, by Aristotle in his infamous ‘Poetics’. He wrote that a play should imitate a single whole action, which has a beginning, middle, and an end.

In 1978, Syd Field turned this Aristotelian theory into the three-act structure. One can read more about this story structure in the book, ‘Screenplay’ by the man himself.

Some writers swear by it and some, swear at it. The Three-Act structure is what the name says it is. A structural model to help shape your narrative. No more, no less.

What Aristotle called the beginning, middle, and end was named as follows by Field in his Three-Act Structure –

Aristotle saw stories as a chain of causes that led to consequent effects. The three-act structure follows the same philosophy. Every act includes a plot point that is responsible for directing the subsequent act.

A plot point can be understood better as any point of action in a story that leads to a change in events. A plot point serves as a link between one act and the next.

The Setup forms the first act of your story. ‘Introduction’ is the best word to define the content of this act. It includes the introduction of the main character, side characters, the setting, and more. Somewhere in the middle or towards the end of this act, the first plot point is placed.

The Setup forms the first half-hour or quarter past half hour of your movie, story, or play. It includes the following –

The viewers understand what day and age the character belongs to. The exposition can be better understood as your mother introducing you to a strange group of relatives for the first time. They want to know everything about you they possibly can!

What Dan Harmon termed as the Story Circle Structure was first explained by Joseph Campbell in his book, The Hero’s Journey. Campbell had listed down 12 stages of a hero’s journey in a story. 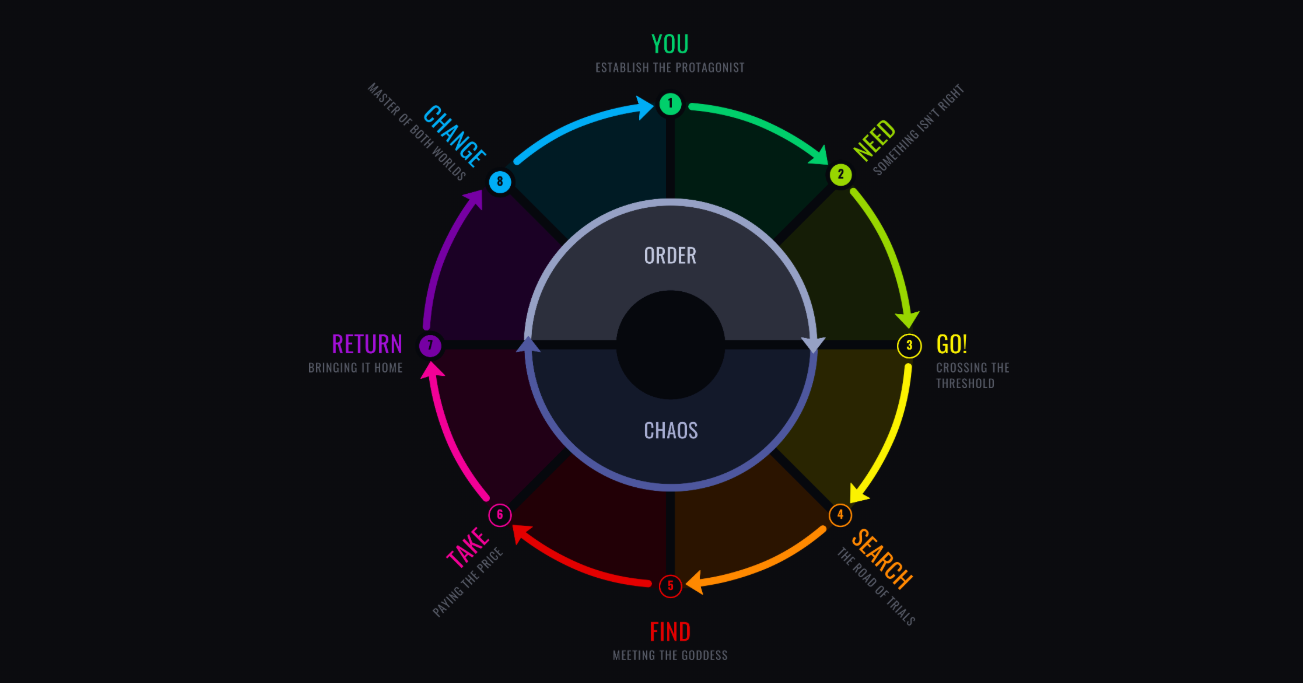 The Story Circle Structure, you guessed it, is a structural skeleton to help you write your story. It is also called The Story Embryo sometimes.

It consists of 8 steps or stages that build the story of your protagonist starting with someone who has a big dream and ending with that someone having transformed in the process of achieving their dream.

The main character is introduced along with the other characters and the setting. Here the character’s current state is established – what they have and how they live at the moment. This stage can be thought of as the beginning of a spectrum whose end lies in Step 8.

This is where the character starts their journey toward achieving their need. They enter novel situations and gain experiences as they try to accomplish their needs.

Now the character is entirely focused on their needs. They might fight obstacles and face hurdles in the process. They have come a long way in their search by now.

The character is inches away from what they had been searching for, now! However, they probably realize that they need something more, or that they have been on the wrong path so far, or that they already had what they were looking for and have left it far behind.

After fighting tooth and nail, the character may or may not have found what they needed. By now they have paid a heavy price for their finding in terms of financial loss, death, betrayal, etc depending on your genre.

The character is now back to living a stable life. They are still carrying their findings with them. Things settle into a routine of sorts and the audience starts to gain closure on the character’s initially troubled situation.

Your character has now reached the other end of the spectrum. They have come full circle and in the journey, they have learned and changed. The change does not necessarily have to be in the character, it can also be in the surroundings. The change is the product of the journey.

Save The Cat Story Structure

It all began when American Scriptwriter Blake Snyder noticed a pattern in his writing. He wrote the book – Save The Cat and talked all about this pattern that he’d observed in it.

Save The Cat is a popular book on scriptwriting that is included in the curricula of most film schools. The book has a beat sheet with 15 beats of story writing. This is what came to be known as the Save The Cat Beat Sheet.

Not only has Snyder provided aspiring writers with the ultimate beat sheet but also the number of pages that need to be dedicated to each beat.

This refers to the opening scene of your story, the first thing the audience views when your movie begins.

At this point, the theme of your story should be evident, or at least mentioned. The audience should know the main idea behind the story.

The background and the characters are set up in this scene. The status quo is revealed.

Here is where the inciting incident will occur for your protagonist and they will be shaken from their status quo.

The inciting event now forces the character to take things into their own hands. The protagonist is deeply moved by the way of things and is battling the thought of taking action.

The protagonist decides to do something and finally take action to change things and deal with the inciting incident.

This refers to any parallel plots that might be brewing. Maybe some new character is introduced, maybe the protagonist falls in love! This is story B, the subplot.

The protagonist is exploring and either having fun or struggling to stay put in this part of the story. Either way, the audience is enjoying the buffer.

The fun and games come to an end and things get serious for your character here. They have to take action and find feasible ways of doing so. This point is an important milestone in your story.

The antagonist(s) is right behind the protagonist and is giving them a hard time. The protagonist seems to have his back against a wall with nowhere to go.

Now the audience probably expects the protagonist to emerge victorious here but the opposite happens. They are defeated and shattered.

The defeat sends your protagonist into a downward spiral and they want to give everything up. There is no motivation for the protagonist to fight anymore.

There is a sliver of hope that the protagonist finds here and is motivated to get back in action. The lost purpose is found.

Your protagonist is fueled with the desire to right all wrongs and do whatever it takes. The villains are defeated here!

This is the final thing the audience views before the screen blanks out. This image sums up the movie and plays the vital role of tying everything together.